Abstract
The following are included in the 2020 update of the CEAP classification: addition of the modifier “r” to the C2 and C6 recurrent disease, addition of corona phlebectatica to the C4 class as a separate subclass (C4c,) subcategorization of ES (secondary etiology) into ESi (intravenous secondary etiology) and Ese (extravenous secondary etiology), and the use of anatomic abbreviations instead of numbering the venous segments in the anatomical classification. Researchers should understand the definition of the recurrence of varicose veins and the diagnostic criteria of corona phlebectatica.
Keywords: Varicose veins, Venous ulcer, Chronic venous disease, Corona phlebectatica, Telangiectasia

This review aims to elucidate the updated contents and the background of the 2020 update of the CEAP classifi-cation system.

1) Revision of the “C” component of the CEAP

The clinical definitions of each classification have been preserved since the last revision in 2004. As with the 2004 revision, basic CEAP for use in clinical practice should report the single highest C classification in a limb, and advanced (full) CEAP for the researcher and for standardized reporting in scientific journals should report all C classes present in the limb. Each clinical class should be further characterized by a subscript indicating the presence or absence of symptoms (symptomatic vs. asymptomatic) ().

Recurrence of varicose veins (C2) and venous ulcers (C6) after intervention to correct reflux is common. In 1998, an international consensus group met in Paris and developed a classification for patients with recurrent varices after surgery (REVAS) to be used in conjunction with the CEAP classification. The clinical definition of REVAS is true recurrence, residual refluxing veins, and varicose veins caused by the progression of the disease. When the recurrence occurred on the same site of a previous operation, the causes could include tactical failure, technical failure, neovascularization, and disease progression (). As the pathophysiology of the recurrent venous disease is different from that of primary venous disease, the recurrent disease may have a distinct natural history and may require different strategies for treatment in comparison with primary varicose veins. The tendency of varicose veins and venous ulcers to recur is reflected in the 2020 update of the CEAP classifi-cation, with the addition of the modifier “r” to the C2 and C6 clinical class. Although the clinical definition of recurrence is identical to that of REVAS, the previous treatments are not limited to the surgical treatments ().

Corona phlebectatica was first described in 1960 by Van der Molen () as a consequence of the venous stasis of the foot. The definition of corona phlebectatica was refined at the revision in 2004 as a fan-shaped pattern of numerous small intradermal veins on the medial or lateral aspects of ankle and foot. Synonyms include malleolar flare and ankle flare ().

Proposed criteria for the grading of extension

Grade I: Incipient corona (or corona grade 1): more than five clusters of bluish intradermal veins in the sub-malleolar area.

Grade II: Definite corona (or corona grade 2): tortuous bluish intradermal veins with a diameter less than 3 mm in the sub-malleolar area, extended over the half length of the foot or more (Fig. 1). 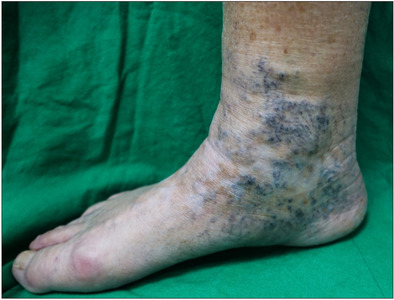 The deciding characteristics to differentiate corona phlebectatica from telangiectasia of the ankle classified C1 are as follows ():

The clinical class in the 2020 update of the CEAP classification is presented in Table 2.

Clinical class in the 2020 update of the CEAP classification

2) Revisions to the etiologic classification (E)

In the 2004 revision of the CEAP classification, there is no clear-cut description of the two different etiologies for secondary venous disease. Although clinical venous signs and symptoms are similar between intravenous and extravenous causes of venous disease, treatment options addressing different components are necessary. In the 2020 update of the CEAP classification, secondary etiologies of chronic venous disease are subcategorized into two subclasses (Esi and Ese).

Intravenous secondary causes of venous disease (ESi) are defined as any intravenous condition causing venous wall and/or valve damage, resulting from conditions such as deep vein thrombosis, traumatic arteriovenous fistulas, primary intravenous sarcoma, or other luminal changes inside the vein.

Extravenous secondary causes of venous disease (Ese) are defined as the condition affecting venous hemodynamics, either systemically (e.g., obesity and congestive heart failure) or locally by extrinsic compression (e.g., extravenous tumor, crossing iliac artery, and local perivenous fibrosis) with no venous wall or valve damage. Muscle pump dysfunction due to motor disorders (paraplegia, arthritis, chronic immobility, and frozen ankle) is also an extravenous secondary cause of venous disease since muscle pump dysfunction causes hemodynamic changes in the venous system of the lower extremity with no venous wall or valve damage (). In a retrospective study analyzing abdominal computed tomography scans conducted in 50 consecutive patients evaluated in the emergency department because of abdominal pain, Kibbe et al. reported that the left iliac vein was compressed more than 25% by the right iliac artery in 66% of enrolled patients and concluded that compression of the left iliac vein may represent a normal anatomic pattern (). However, interruption of a major venous pathway cannot be considered a normal variant, rather only clinically asymptomatic. Raju et al. reported that nonthrombotic iliac vein lesions (NIVL) such as compression of the left iliac vein by the crossing of the right iliac artery are considered a permissive condition predisposing the development of chronic venous disease (). Permissive conditions are pathologic conditions that may remain silent until an additional pathology is superimposed. Concomitant venous reflux or the superimposed pathology could render a limb with NIVL symptomatic. Hemodynamic abnormalities may be present even in the absence of symptoms in patients with NIVL. In a study analyzing the late clinical results of superficial femoral vein ligation performed in 35 limbs, 86% of patients showed good tolerance without symptoms over long-term (). Intravascular ultrasound (IVUS) is recommended as a diagnostic and procedural tool in iliac-caval stenting (). When NIVL is combined with venous reflux, treatment of the permissive condition first is recommended because treatment of the permissive condition alone may provide symptom relief. Raju et al. reported that 75% of limbs with NIVL and concurrent venous reflux experienced a good outcome with stent placement alone, even when the reflux was uncorrected ().

3) Revisions to the anatomic classification (A)

In the 2020 update of the CEAP classification, standard abbreviations of anatomical terms are used for the classifi-cation of vein segments instead of numbering since using numbers to denote venous segments is believed to be too difficult to effectively use, and the use of the abbreviations should increase the specificity and reproducibility of CEAP.

A summary of the anatomic classification (A) in the 2020 revision of CEAP is presented in Table 4.

4) Revisions to the pathophysiologic classification (P)

The P component of CEAP remains unchanged in the 2020 update of the CEAP classification (Table 5).

In the 2020 update of the CEAP classification system, the clinical classification had the most dramatic revisions. Researchers should understand the definition of the recurrence of varicose veins and take into consideration that corona phlebectatica, which was classified as C1 (telangiectasia) in the CEAP revised in 2004, is newly classified as C4c in the 2020 update of the CEAP classification. The diagnosis of corona phlebectatica is determined by the presence of blue telangiectasias below the malleolar areas extending equal or superior to half the length of the foot and can be reinforced by stasis spot or perivenous pigmentation.